FNF vs The Devourer Of Gods 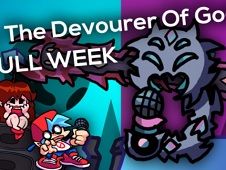 What is FNF vs The Devourer Of Gods?

In an unknown way, the famous couple Girlfriend and Boyfriend are teleported in a world unknown to him until then, respectively in the World of Terraria where they will meet the most powerful enemy on that planet, the worm Devourer Of Gods on which Boyfriend will have to face him in a rap battle, if he wants to leave this fascinating world.

Who is The Devourer Of Gods from Friday Night Funkin?

This mystical character is a killer worm from Terraria that you will have to beat in the new way with BF. This character is presented in the game as the last level of the game, respectively, the strongest of the enemies you have to beat, which is why you have to be careful and try to move as fast as possible to the rap rhythms. so as to bring it down.

Our creature is a scary one, with two heads, one main and the other secondary. The main part coordinates the whole body of the worm, and the moment an enemy approaches it, it opens its mouth and eats it. The color of the worm is purple, and the eyes and mouth are pink. In your new mission you will have to dance to three new types of songs which are the following: