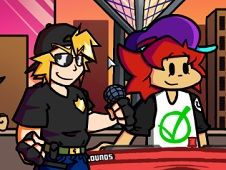 Are you ready to test the new Friday Night Funkin Mod? Unified Beats, the battle between COPS and RAPPERS is a different game than the ones you have tested so far, because the game is much larger, and the activity you will have to carry out will be more complicated, but for those who know the rhythms In previous levels of rap, this mod will be just a new challenge in which you will have to help Boyfriend get through the current battle.

What is Unified Beats COPS & RAPPERS about?

The Garbage: The battle will take place between The Monkey, who is a cute monkey, dressed in shorts, with a pair of blue pants, a hat on his head, against Check, a cute little girl with red hair and a hat on his head. The battle takes place on the territory called "Home Sweet Home";

Story: The sunshine state: home of most insane poeople on the planet as well as a certain virtuous vigilante. Think you can handle a bit of Floridian thunder?

Story: Numble Beginnings: The check workshop and the Monkey, and the shabby start to their insane adventure.

Before starting the battle, we guide you to select the level of difficulty as you see fit. Beginners would be advised to start with the Easy level, and depending on how good you are at this game, you will be able to continue with the next more advanced levels.