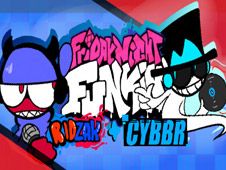 Once again today on our website you will be given the chance of having lots and lots of fun with some new Friday Night Funkin Games online, and today's addition is a cool new one called Friday Night Funkin V.S. RidZak + Cybrr, which brings back this first antagonist, but now we've also got one of his friends in the mix, for an extra dose of fun!

Meet your new FNF rivals, and defeat them!

RidZak is a red demon with a blue outfit and cap on his head, while Cybrr is his friend, a DJ ghost, both of which you are going to challenge in this game, each coming with their custom songs as well, of course.

With the arrow keys, you will sing the notes of the songs, having to press the keys when they match above Bf's head, but you need to be careful not to tap wrong keys, or tap them at the wrong time because doing that too many times consecutively means messing up the song and having to start the game from scratch. We wish you all good luck right now, and, all the best, of course!