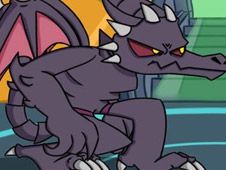 What is Friday Night Funkin' vs Ridley Metroid?

If you're a fan of both FNF Games and the Metroid series, you are really lucky to be on our website today, where right now we are delighted to share with you all a new and awesome game such as Friday Night Funkin' vs Ridley Metroid, which has all you would want from this series, meaning music, awesome characters, and non-stop fun!

Learn more about the Metroid characters featured in this FNF game:

Instead of having BF as the protagonist, this game pits two characters from the Metroid series against one another, with the first one being Samus Aran, who is a bounty hunter who travels the galaxy for his targets, and his latest targets, Ridley, who is a mix between a reptile and a human. The song you will battle this creature on is called Harbinger.

When arrows match above your character's head, press the same arrow to hit the notes of the song at the right time, and make sure to keep doing so until you get to the end of the song and win! Be careful not to press wrong keys, or press the right ones at wrong times, because too many of these miss happening in a row will cause you to lose.

Have fun, and make sure to check out more of the games in this category, you won't regret it!