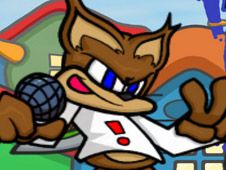 What is Friday Night Funkin' vs Bubsy?

We love it when brand new characters get featured in our category of Friday Night Funkin' Games online, where right at this moment we are delighted to share with you the brand new mod called Friday Night Funkin' vs Bubsy, featuring a new animal character called Bubsy, and just because he is an animal, you shouldn't think that he doesn't have the funk in him!

Bubsy is a niche character coming from a series of action-adventure games from the past that is called Bubsy: The Woolies Strike, a platform game similar to Mario Games, and he is a lynx ready to fight off against your character, Boyfriend, in the custom songs called Retrospective, Paws, and Goldx.

Don't you know what to do? Worry not, we're here to explain! You will use the arrow keys to hit all the notes of the song because that is the only way to win the game, which happens once the progress bar has turned green. Press the same arrows as those that are matching above Boyfriend's head.

Make sure not to press the wrong keys, or press the keys at the wrong times, since too many of these mistakes in a row means losing the game, and we're sure that you don't want that to happen!