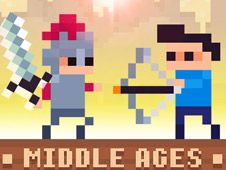 What is Castle Wars Middle Ages?

Seeing as all our previous turn-based strategy games online had been received extremely well by our visitors, we knew that today we had to bring over for you all the new and awesome game called Castel Wars Middle Ages, a new action game we highly recommend for all our visitors since you are about to have lots of fun with it, just like our team has had when they played it!

Shoot the other player's castle down and be the last one standing!

Two players, each with their own castle, are going to sit one in front of the other, and using weapons such as swords, fire, and cannons, you will try to bring down the castle of the enemy first because if you tear it down first, and yours is still standing, you become the winner of the war!

If you want a co-op mode instead, that is possible, where both of you work together to defend only one castle, and you do this against the hordes of zombies that will attack you constantly, one wave after the other one!

As for the controls, P1 will use W, A, S, D to move, S to create blocks, E to hit, Q for changing weapons. P2 will use the arrows for moving, with the down one being used for creating blocks, space to hit, and M for weapons change.

Now that you are ready to start the war, play this game right away, and don't hesitate to share it with your friends also, they will definitely love it a bunch as well!