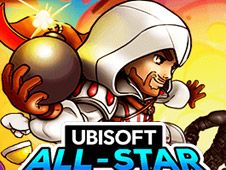 What is Ubisoft All-Star Blast?

Playing Ubisoft Games for browsers is not something that you get to do just every day, which is the reason why right at this moment we're sharing with everyone here a new and awesome game such as Ubisoft All-Star Blast, which is a Bomberman-like game where you play against other players from all over the world, also making it one of our best new multiplayer action games online!

Throw and avoid bombs until you're the last one standing!

The map you will find yourself in will be a maze-like one, made up of boxes, grass, stone, and other materials, and you need to corner your enemies so that you throw bombs on them they won't be able to avoid until you destroy them, but, be careful, since they are trying to do the very same thing to you.

Move using the arrow keys, and press the spacebar to throw bombs. You can enter the name you want to be known as, and you start off as Ezio Auditore from Assassin's Creed, but the more matches you win, and the better you perform, the more points you get, you climb in the rankings, and you can unlock cool new characters to play with, From Far Cry, Rabbits Invasion, or Splinter Cell, just to name a few!

Good luck to you all in this new and awesome action-packed game like no other, with us really hoping to see more of you here today, you won't regret being here!