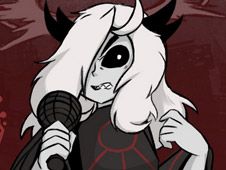 What is FNF vs Ashtoreth?

We love it when the Friday Night Funkin Games series gets magical and hellish, which is the case once more right now and here, as our team invites you all to check out the new and awesome game called FNF vs Ashtoreth, where GF was making some sort of ritual and summoned the demon called Ashtoreth, and now you need to help BF defeat it and make it get back to hell.

You will face off this demon on the custom song called Stylish Sacrifice, and we will teach you how to play the game right here and now, in case you're new to the series!

Learn the rules of FNF Games, so you can win this one right now!

Help Boyfriend win by turning the progress bar green and reaching the end of the song, so you need to hit the notes of the songs at the right time. Press the arrows when the same ones match above BF's head, and not one moment sooner or later, or press the wrong keys, since too many notes missed means you will eventually lose the game! Good luck!