FNF vs Door to Door Salesman 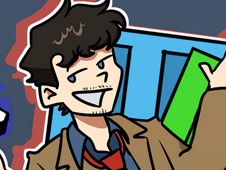 What is FNF vs Door to Door Salesman?

All sorts of characters pop up in the Friday Night Funkin Games series of our website, and we love it, because the more diverse this category becomes, the better it is for its fans, and right at this moment we wanted to share with you all here a new game such as FNF vs Door to Door Salesman, where we've had immense fun from start to finish, so we hope you do too!

Defeat the salesman in a rhythm battle to get rid of his annoying pitch!

Door to door salesmen are a thing of the past, now that everyone can buy things on the internet, and shops are always one step away, which is why Boyfriend was transported back in time when he saw one at the door of his house, but he also became quite annoyed, so now they are having a rhythm battle.

To completely get rid of this character, defeat him in all the three songs:

To win you need to hit the notes of the songs at the right times, using the arrow keys to do so. Make sure you press the arrows at the correct times, because if you do it wrong and you miss too many times in a row, you lose the game and have to start it from scratch, and this is something we really hope won't happen! Good luck!