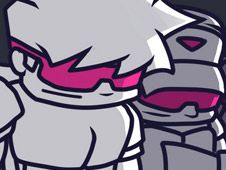 What is FNF vs Stan (Nightmare Cops)?

Characters that return in our FNF Games in different roles are awesome, but we love it, even more, when we've got brand new characters with whom you can have fun, just like it is the case today with the mod called FNF vs Stan (Nightmare Cops), where Boyfriend needs to defeat this character from a different game after their paths have collided!

Why are Boyfriend and Stan going at it? Find out!

Stan is the protagonist of an action-horror game, where he is a cop tasked with defeating various evil monsters, demons, ghosts, zombies, and the likes, and when Boyfriend stepped into his universe, next to a haunted high school that looks very scary, he challenged him to a rhythm battle, since he saw him as an opponent.

To achieve victory you need to turn the progress bar of each song fully green, which is done by hitting all the notes of the songs at the right time. Press the arrows at the same time as the arrow symbols match to do so. Missing them too many times means losing the game, so don't let that happen! We wish you all the best, and, of course, we hope to see you a winner!