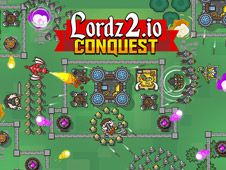 Io multiplayer games with strategy, wars, and action is something we're sure the visitors of our website, mostly boys, want to have more of, which is why we want to make them happy, just like we're doing in this instant when all of you are invited to have the most fun possible with the game called Lordz2.io, an even better game than its predecessor!

Become the best feudal lord of this multiplayer game!

We know that strategy games and real-time war games are genres that have been around for a long time, so the mechanics of this game are already tried and tested, but the novelty that it brings to the table is that the game is a multiplayer one, meaning that instead of battling NPCs, you are going up against other real players from all over the world.

Who will have the better strategy? We hope that you! As a lord, try to gather the resources you need to build the walls of your kingdom, protect it with moats, build your castle, you will create greeneries, shops, barracks, and plenty of other facilities and buildings that are necessary to the well-being of your people.

Most importantly, create a big army, the bigger and more powerful you can have it, the better so that you can go and conquer the territory of your neighbors, eliminating them from the game, while also building powerful defensive systems that will help you when enemies attack you instead.

Use either the arrows or mouse to move, click on the buildings or enemy forces you want to attack, and activate special powers by pressing the spacebar. We hope that you keep becoming a stronger kingdom, a better lord, and in no time at all you will climb the rankings, all the way to the top!

Use the mouse, arrow keys, spacebar.