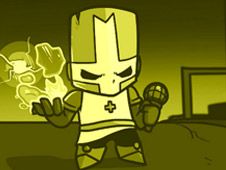 What is Friday Night Funkin vs Knight?

It's time for you to hop aboard the train of fun with some more new FNF Games online of the highest quality, as our team is now delighted to share with everyone here the game called Friday Night Funkin vs Knight, where BF was transported into the past, all the way to medieval knights, where he now needs to have a rhythm battle against a grey Knight from Castle Crushers.

Only if Boyfriend wins the duel will he be able to travel back to the present together with his Girlfriend, so help him rock all the four songs of this game, and not miss a beat. The Knight Week custom songs are:

How to play FNF Vs Knight online:

When arrow symbols that float around Boyfriend match with one another on the top of his head, that is the moment when you need to press the same arrows on your keyboard, so that you play, sing, or rap the note of the song at the correct time.

Be careful not to miss too many of the notes in the songs consecutively, because if that happens you lose and have to start the musical battle all over again from scratch. Good luck!