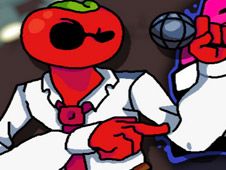 What is FNF Vs Tomato Dude?

He's a dude wearing a suit, but he is actually a tomato, he is the Tomato Dude! Yes, this is the new antagonist you have to help Boyfriend face in a brand new rhythm game from the Friday Night Funkin Games series, where you have to defeat this cool tomato macho guy on no less than six new custom songs:

How to play and win this new FNF game:

To win the matches you need to reach the end of the songs and have the progress bar be more in your favor than that of the Tomato's, and you can play against him in either the story mode or the free play mode, with you picking the level of difficulty depending on your previous experience playing FNF Games.

When arrow symbols match above Boyfriend's head, press the same arrow keys on your keyboard to play and sing the notes of the songs at the right time. Be careful not to miss playing too many notes in a row, because if that happens you lose and have to start all over again from scratch. Good luck!