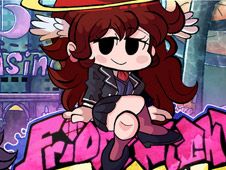 We really love all the awesome creations of FNF modders, which is why we don't shy away from offering you the best of the best when it comes to this category, just like we're doing today with the Friday Night Funkin X RinceWind University Mod.

Now, in case you are not familiar with this crossover, don't worry, since RinceWind University is a cartoon idea of the mod's creator, so he gave the characters of FNF a makeover according to his imagination.

Boyfriend, Girlfriend, Daddy Dearest, Pico, and all the others are now students in this university, which comes with new backgrounds, new sprites, but which keeps the songs you love so much.

When Boyfriend battles an opponent in a rhythm battle, you will use the arrow keys to hit the notes of the songs at the right time, so when arrow icons match one another, that is when you also press the same arrow on your keyboard, not sooner or later.

Missing to play too many of the notes in the songs consecutively will mean you lose, so focus hard and give the game your best so that it does not happen. Good luck, enjoy, and we hope that this is far from the final new game you play here today!