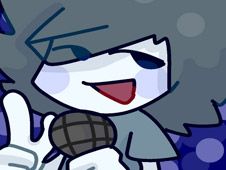 What is FNF Vs Puddee?

Except for having a really good rhythm and being good at music, no one really knows what Puddee is. Is he a man? Is he a child? He has quite the bland look, looking like a sketch of a boy with somewhat spiky hair, and he is the replacement of Pico in Week 3 and the new character that you have to defeat in a musical battle. Think you're up for it?

Are you brave enough to take on Puddee in a rhythm battle?

If so, then hit the Week 3 of the game in the story mode, or choose any of the three Pico songs in the Free Play mode. It's up to you in which level of difficulty you take him on, but, either way, you are going to try and reach the end of the songs with the progress bar in your favor to win!

When the arrow symbols above BF match one another, don't waste time and press the same arrow key on your keyboard to hit the notes, but be careful not to miss that moment. Once it's fine, but if you make that mistake too many times, you eventually lose the game because you've missed too many notes of the songs.

We wish you all the best, all the luck, and good timing in the world, and we hope to see you around, having even more fun on our website!