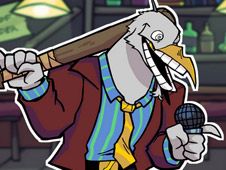 What is Friday Night Funkin’ vs Avenue?

While at a bar, Boyfriend and Girlfriend catch a glimpse of a peculiar patron, a former debt collector who is a bird called Avenue, which is why the alternate title of this mod is Vulture Culture. He wears a suit, his eyes are crazy, and in one hand he holds a microphone, but in the other one, he has a bat. You will face off against him in the songs called:

How to play and win the FNF Vulture Culture Mod:

Win by reaching the end of the songs and turning the progress bar to your favor, which only happens if you have a better rhythm than the antagonist you are facing. You will press arrow keys when the same arrow symbols on the screen above BF match one another but remember that if you miss pressing the keys too many times in a row, you lose the whole game.

Good luck to each and every one of you, and we hope that you don't stop here, but keep an eye on the many other amazing new FNF mods coming today here only for you!