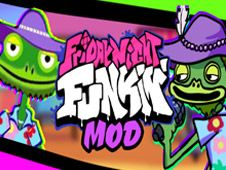 What is FNF vs PARAPPA (Prince Fleaswallow)?

PARAPPA THE RAPPER is the godfather of rhythm games, so of course, he would often be featured in our series of Friday Night Funkin Games online, just like today, when instead of being an antagonist, he becomes the protagonist that you control, with you having to help him defeat Prince Fleaswallow in this mod called FNF vs PARAPPA (Prince Fleaswallow), with new backgrounds, sprites, and, of course, awesome music!

When arrow symbols floating around Parappa match with those above him, at the same time you have to press the same arrow keys on your keyboard to play or sing the notes of the songs in their right time in the chart, and if you do this through the end of the songs and the progress bar turns in your favor by then, you win.

Good luck to you all, and we hope that you don't miss playing or singing too many of the notes one after another, since that will cause you to lose the game. Good luck, and make sure this is not the final new game of the day you play on our website!