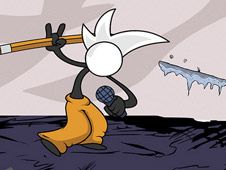 What is FNF vs Fancy Pants 2?

The first FNF Fancy Pants Mod of our website has been so well received that we've now got a sequel of it for you here, when for free and right at this moment you can enjoy the game called FNF vs Fancy Pants 2, which brings the same stickman character from that famous original series, but the backgrounds are new, the sprites are cooler, and we've got three new songs:

Boyfriend Vs Fancy Pants, Round Two!

To win the battle you need to reach the end of all three custom songs and have the progress bar in your favor, and that only happens if you sing or play the notes of the songs at their right time, something for which you use the arrow keys.

When arrow icons floating around BF match with those above his head, that is your queue to press the same key on your keyboard, but be careful not to make a mistake and not press at the right time, because too many mistakes and you lose the game.

Good luck we want to wish you all, and we hope that you don't stop here, but keep having fun with even more awesome games as only on our website can you find them!