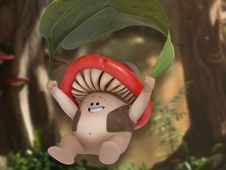 What is Mush Mush Leaf Gliding?

Mush grabbed a leaf, but because he does not have a lot of mass and is quite small, that leaf acted as a glider and it started rising him up in the air, so now your favorite fungi is flying, and only with your help will he be able to reach the top of the forest without falling to the ground, something you're invited to do in our new and awesome game called Mush Mush Leaf Gliding!

Glide through the forest and get a big score!

As Mush is flying with his leaf, you will use the right and left arrow keys to direct him, as you need to avoid both the branches of the trees and the spiky plants that are falling from the sky, because if they touch him, they ruin the leaf and he falls.

Instead, try to get as up as possible and also collect as many of the veggie burritos as you can, because they represent your score, so the more of them you have, the bigger your score ends up being.

It's that simple and fun, and you won't have even one moment of getting bored, so we hope you are starting this game and the fun right now!