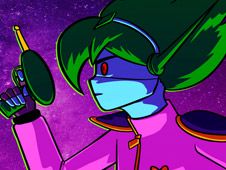 What is FNF vs Space Boyfriend?

The fun keeps going strong in our category of Friday Night Funkin Games category, where we are returning right at this moment with the game called FNF vs Space Boyfriend, where BF has to face off against an ex-boyfriend of Girlfriend who comes from space, him being an alien with green hair, who has a space blaster in one of his hands, and a green cape.

Defeat him on the custom songs called

Boyfriend Vs Space BF, who will win?

Since you are on the side of Boyfriend in this game, we hope that you are the winner, whether you play in the story mode or the free play mode, with both of them being your own choice. You can also pick a level of difficulty. Win by reaching the end of the songs with the progress bar in your favor.

To play the songs according to their charts, use the arrow keys, pressing them at the same time when the arrow symbols match above BF, simple as that. Missing to press too many of the songs in a row causes you to lose, so be careful not to let that happen. Good luck!