FNF VS The Rascals 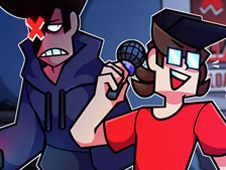 What is FNF VS The Rascals?

The Rascals, otherwise known as Gorbini and Quilt, have quite the awesome house, since they are big rap stars, and Boyfriend took Girlfriend to that house to impress her, saying it is his. Well, that is when the rap duo came back, and Boyfriend convinced them that instead of calling up the police, they should duke it out on a rhythm battle, so help our protagonist win and escape this situation, doing it on the custom songs called:

Can you help BF defeat The Rascals in a rap battle?

To do so, you need to have a good rhythm and sing the songs appropriately, so follow the chart to do so. This means that when arrow symbols above BF match, you need to press the same arrow key on your keyboard and be sure not to do it too fast or too early, since that is a miss, and missing too many notes of the song means losing the game.

Pick between the story mode and free play mode, and then give this game your best, as only here is possible, where even more games with FNF will follow!

Paws in the Snow
ADVERTISMENT