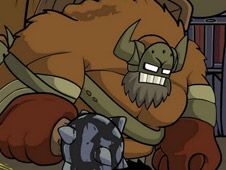 What is FNF vs Barbarian Champion?

Boyfriend's newest music rival is called Barbarian Champion, and he is a huge man wearing a brown leather suit and a green mask with six holes in it as well as horns, and this is because he usually fights with fists and raw strength, and only recently tried to take the more peaceful way of battling with rhythm.

He might be the champion of fighting, but he is not the champion of music, as BF is, which is why he challenged our protagonist, so you now need to help the little blue boy win this new fight, this time on a song called Bashing Drums.

Boyfriend Vs Barbarian Champion: who is the ultimate king?

To win this musical battle you need to reach the end of the songs with the progress bar in your favor, and to achieve that you need to sing the song according to its chart. To do so, when arrows are matching above BF, press the same arrow key on your keyboard.

Make sure not to miss pressing too many of the keys one after another, because if that happens you lose the game and have to start again. We wish you good luck, all the best, and we hope to hear more from you!