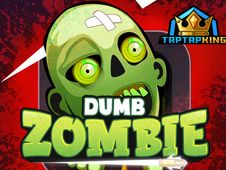 What is Dumb Zombie?

Zombies are dead, so they are dumb, which means that despite them being quite dangerous because they want to eat your brains and will attack you on sight, they can be shot down by smart humans that know how to attack them properly, which is the role you will assume in our latest game right now, as our team is delighted to share with you all the game called Dumb Zombie.

Shoot down all the dumb zombies, and survive!

In each level, there is a number of zombies you have to shoot down to clear them, and not only does the number of zombies increases level by level, but you will also see that they are put and placed at more complicated angles, and between you, the shooter, and them, there will be static or moving obstacles.

You will use the mouse to shoot the zombies, so hold the left mouse button and move it around, releasing it when you think you've got the best angle to shoot at. Remember that you have a limited number of bullets you can use in each level, so if there are still zombies remaining when you run out of bullets, you lose that level.

Good luck, have fun, and don't stop here, since it would be a shame for you not to play the other fresh games of the day still coming!