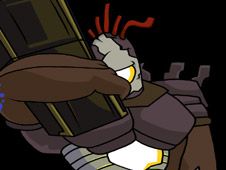 What is FNF vs Cyclops and Groom?

Every chance we get to bring you new Friday Night Funkin Games online on our website, you can bet that we take that opportunity, so for that reason, we are now excited to share with you all the game called FNF vs Cyclops and Groom, definitely one of the coolest new games of our website for the day, where Boyfriend has to face off against two mythical antagonists!

Can you help BF defeat the two supernatural creatures?

Cyclops is a knight who wears heavy armor and has only one eye, just like his name suggests, and Groom is his sidekick, with the two characters having been featured in the highly-popular game called Castle Crashers, and if you love that game too, this game is for you! Memory-Replevy is the name of their custom song.

You will win if you reach the end of the songs and the progress bar in the middle is in your favor. To achieve that, use the arrow keys to hit the notes of the songs at the right time, so press them at the same time as arrow symbols are matching above Boyfriend, simple as that! Don't miss too many notes, or you lose the game!