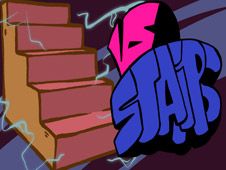 What is FNF vs Stairs?

Boyfriend is never going to run out of crazy and weird antagonists to face off against in our many games with Friday Night Funkin' online on our website, just like it is the case right at this moment, when our administrative team is delighted to share with everyone the game called FNF vs Stairs, where he will fight a literal set of stairs and the song you do it on is a custom one called Climacophobia!

Only you can help BF tackle the Stairs and win!

Start by picking between the story mode and free play mode of the game, and do your best to win by reaching the end of the songs and turning the progress bar in your favor, simple as that. To achieve that, you need to have good timing and play the songs according to their charts.

This means that when arrow symbols above BF match with one another, you will press the same arrow keys on your keyboard, not sooner or later. If you press the keys at the wrong time, you lose, so don't allow that to happen. Good luck, and we wish you all the best, as always!