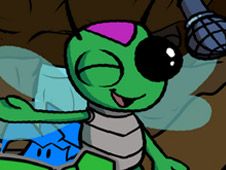 What is FNF vs Wisebug?

It's a day of never-ending fun for all those of you who love playing Friday Night Funkin' Games online on our website, which is an opportunity we want to share with you all right at this moment through the awesome new game called FNF vs Wisebug, where Wisebug is a flying insect you find at the bottom of a cave you and Girlfriend were exploring, so now you have to defeat it in a musical battle to escape.

The FNF Wisebug Mod songs are:

Help Boyfriend defeat Wisebug and save the day!

As with previous rhythm games added so far in this category, you have to win by reaching the end of each custom song and turning the progress bar in your favor, which happens if you've played all the notes of the songs correctly.

To do so, when arrow symbols above BF match one another, you have to press the same arrow key on your keyboard, but make sure not to do it too fast or too late, since that is a miss, and missing too many notes in a row means losing the game. Enjoy!