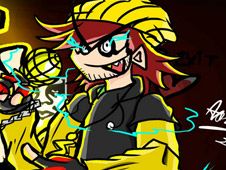 What is FNF vs Volt?

We promised, so we delivered new FNF Games online for you today on our website, which is the reason why all of you are invited to have a ton of fun with the game called FNF vs Volt, where Volt is an ex-rapper at the age of 26 whose career was ruined by Daddy Dearest, so for that reason he now wants to take revenge on the whole family by beating Boyfriend in a rap battle, something that you will do on two original songs:

Can you help BF defeat the lightning-fast rapper, Volt?

If the answer is yes, and you think you've got the chops, pick between the Story Mode and Free Play mode, and then give it your best to win the rap battles by reaching the end of the songs and rapping so well that the progress bar is in your favor.

To do so, you will use the arrow keys, pressing them at the same time that arrow symbols above BF match with one another. Be careful not to press the keys wrong too many times in a row, or you lose the whole game. Enjoy!