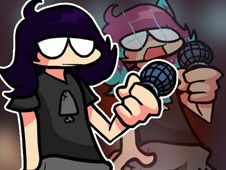 What is FNF vs Salmon?

Here it is, yet another new and awesome opportunity for you to play on our website new Friday Night Funkin mods online for free, as right at this moment on this page you get to experience the awesome new mod called FNF vs Salmon. Salmon is a boy, and Isabelle is a girl, his girlfriend, and Boyfriend has to defeat both of them in a rap battle on the following songs:

Help BF defeat the power couple of Salmon and Isabelle!

You will be able to battle these characters in either the story mode or free play mode, it's up to you, but the goal remains the same, which is reaching the end of the songs and playing the songs so well that the progress bar is in your favor.

So, this means that you have to press arrow keys on the keyboard at the same time as arrow symbols above BF match with one another. Don't do it too early, or too late, or press a wrong key, since that is a miss, and having too many misses means losing the game. Good luck!

FNF vs No-More-Innocence but no Virus
ADVERTISMENT