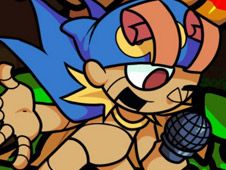 What is FNF: Friday Night RPG vs Geno?

Today is a great day for all you fans of Friday Night Funkin Games online from our website, who right now are going to have tons of fun with the game called FNF: Friday Night RPG vs Geno, where Geno is a puppet originating from the Super Mario RPG: Legend of the 7 Stars game and he brings along two awesome new custom songs to battle him on, at least for the demo version:

Help Boyfriend defeat Geno is a musical battle of rhythm!

To win each battle on each of the two songs you need to reach their end and have the progress bar in your favor, and to achieve this you will need the arrow keys, pressing them at the same time as arrow symbols above BF match one another, since that is how you hit the notes according to their charts.

Of course, this means you lose in case you've missed too many notes one after another, so be careful not to allow that to happen. Good luck, enjoy, and make sure to tell your friends how many awesome games they've got here to play, they will love it!