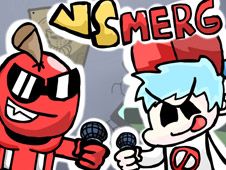 What is FNF vs Merg?

Merg is a man whose skin is fully red, his head looks like a tomato, he has quite an angry face, and he always wears sunglasses. He is also the newest antagonist that Boyfriend from FNF has to face off against, and he is yet another avatar inspired by a famous YouTuber. Help our protagonist defeat this new foe on the following songs:

Boyfriend Vs Merg, who will win?

Considering that you play the role of BF, we hope you win, so focus all the time so that through the whole song you play the notes accordingly, which is why when you see arrow symbols match above BF's head, you have to press the same arrow keys on your keyboard, hitting the notes at the right times.

You win once you've reached the end of the songs and the progress bar is in your favor, but be careful not to miss playing too many notes one after another, because if that happens, you lose. Good luck!