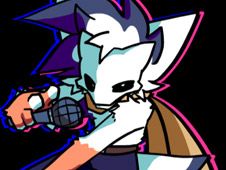 What is FNF VS Jordan Mod?

Somehow, Boyfriend ended up in the sky, where he encounters Jordan, a beast-man holding a microphone in his hand just itching for the chance to take part in a rhythm battle, even more so if it is against the renowned BF, and now you are going to give your best to help our protagonist defeat him on the following custom songs:

Help Boyfriend defeat Jordan all the way up in the sky!

You are going to use the arrow keys to play the notes of the songs at the right time, so when you see arrow symbols above BF match one another, you have to press the same arrow keys on your keyboard, not a moment faster or later.

If you play the notes according to the charts and reach the end of the songs, you win once the progress bar is in your favor. Be very careful not to miss too many notes consecutively, because if that happens you've got to start again from scratch. Good luck!