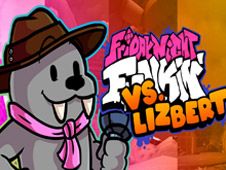 What is FNF vs Lizbert?

It seems that Boyfriend and Girlfriend weren't the only adventurers and explorers visiting the island of Snaktooth, because there they met the famous explorer called Lizbert Megfig, who is a seal, but also a rap battle enthusiast, so when he met Boyfriend, he knew he had to challenge him.

Well, we hope that right now you will play FNF vs Lizbert and help BF defeat this antagonist, something that you do on the following tracks:

How to play Friday Night Funkin vs Lizbert online:

For starters, you have to pick between the story mode and the free play mode, it's up to you, with the goal being to reach the end of the songs with the progress bar in your favor since that is when you've won. That only happens if you've played the songs according to their charts.

You will use the arrow keys to play notes, so when arrow symbols above BF match one another, you have to press the same arrows on the keyboard. If you miss doing that too many times in a row, you lose the game, so be careful not to allow that to happen. Good luck, and enjoy!