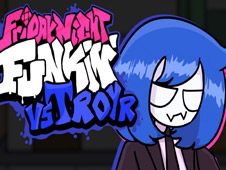 What is Friday Night Funkin vs Troyr?

Troyr is the kind of guy who always has a pillow with a cute anime girl on it, and when Boyfriend saw his pillow, he really liked it too, so he asked for it. Well, Troyr would not want to give it to him for anything in the world, so now the two of them are having a rap battle, and if you win, Boyfriend can get it!

Defeat Troyr in either the story mode or free play mode, on the following songs:

How to defeat Troyr in a rhythm battle?

Well, you've got to reach the end of the songs in order to turn the progress bar in your favor, so use the arrow keys to do that, pressing them at the same time as arrow symbols above BF match, since that is how you play all the notes of the songs at the right time.

Be careful not to miss too many of the notes one after another, because that happening means losing the game and having to start it again from scratch. Good luck we wish you all, and we definitely hope to see more of you here today!