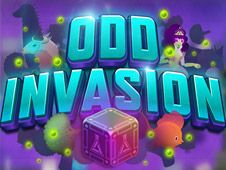 What is Odd Invasion?

Odd Invasion is one great way to kick-start our new category of Odd Squad Games online, where we are delighted that we will be able to bring you lots of new and awesome games in the near future because these are games that are equally fun and equally educational, so there should be lots of incentive for kids to try them out!

Can you help the Odd agents stop the invasion?

The secret base of the Odd Squad agents has been invaded by all sorts of creatures and things come to life, such as the broccoli that you are going to face off against in the first level.

Your goal is to get rid of the creatures at the end of each level, with each level representing a room you have to clear out of enemies to advance further.

To do so, power up your device with energy balls of the same number as the number of the creature, since then you can shoot it down with your device.

Don't grab too many energy balls, or too few of them, since you can only defeat a foe when you have the same number as them. It's a great way to learn more about numbers, being both fun and exciting, so we hope you start doing so right now!