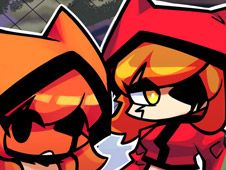 What is Friday Night Funkin vs Ruria?

Ruria is a red-haired female assassin from Russia, who has been sent out to take out Boyfriend now that he and Girlfriend are vacationing in this country, but, as usual, instead of using weapons, Boyfriend will battle his foes through rhythm, so now you have to help our protagonist defeat this girl in a musical battle.

In either the Story Mode or the Free Play mode, challenge Ruria on the following songs:

Can you help BF defeat the newest FNF killer, Ruria?

If so, then make sure you are focused all the way through the songs, because you need to play their notes at the right times in the charts in order to reach the end of the songs and have the progress bar in your favor, since then you win!

So, when you see arrow symbols match above BF, you will have to press the same arrow keys on the keyboard, not one moment faster or later, because if you do that, you will eventually lose, after too many missed notes.

Good luck to you in this new upcoming rhythm battle in Russia, and we hope that you stick around to catch the other amazing new games still to come!

Paws in the Snow
ADVERTISMENT