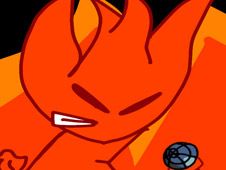 What is Friday Night Funkin vs Blaze?

Blaze, the newest antagonist you have to face off against in our series of FNF Games online is a literal flame that is always burning, and he is definitely burning with passion for music as well, which is why he is very excited that he gets to challenge Boyfriend to a musical battle, with you playing the role of BF and giving it your best to win!

The custom songs featured in either the story mode or free play mode from Friday Night Funkin vs Blaze are:

Try being as fiery as possible to win the rhythm battle against Blaze!

You will use the arrow keys on the keyboard to play the notes of the songs at the right time, so when you see arrow symbols match above BF's head, you need to match them by pressing the same keys at the same time.

If you do that until the end of the songs and the progress bar fills in your favor, you've won, but be careful not to miss doing that too many times, because if that happens, you can lose. Enjoy!