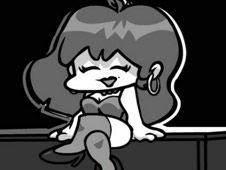 It is true that there has already been an Elegant Night Dancin' Mod added before in our category of Friday Night Funkin' Games, but this one is the updated version that you really need to play right now since in this V2 version the characters get new designs reminiscent of the fifties when movies and tv were shown in black and white, people were suits and dresses, and everyone tried to be as elegant as possible.

That's not all, because the characters look and feel from that age as well, and they bring along new songs and remixes too, such as:

Help BF defeat all the old-timey antagonists and return to his timeline!

Just like in previous entries of the series, use the arrow keys to hit the notes of the songs, pressing them at the same time as arrow symbols above BF are matched with one another, but don't do it too soon or too late, because too many misses in a row cause you to lose.

If you've got the timing right and all the notes are played correctly, you eventually end up with the progress bar towards you, and then you have become the winner. Good luck!