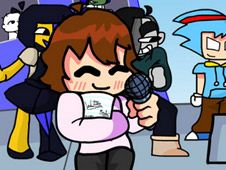 What is Friday Night Funkin vs Javier?

Javier might be depressed, but that does not stop him from being one of Boyfriend's biggest fanboys in the world, and the fact that he can now challenge his idol in a musical battle is what brings him the most joy he's ever had, and he does not care even if he loses, which he will because you will play the role of BF and give your best to defeat him! Challenge this new character on the following songs:

Boyfriend VS Javier, can BF win?

If you are by his side and give it your best, we're sure he can, so when you see that arrow symbols above his head are matching with one another, press the same arrow keys to match them and play the notes of the songs.

You have to do so until you reach their final note, and if the progress bar has turned in your favor, you have become the winner, simple as that. Don't miss too many notes in a row, or you also lose the game. Good luck!