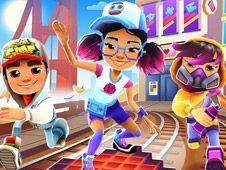 What is Subway Surfers San Francisco?

San Francisco is the technology capital of the world since that is where Silicon Valley is, but it is also one of the most popular and interesting cities in all of California, so an amazing place for you to explore on the World Tour you are now going together with your favorite characters from Subway Surfers!

As you are running from those chasing you on the railway lines, you get to visit the most iconic places in San-Fran, which is how this city is called for short, with your goal being to reach a distance as big as possible, as this is an endless running game, of course.

As you run forward on the tracks automatically, you have to avoid hitting the trains, roadblocks, or any other kinds of obstacles that might appear, since bumping into them slows you down, and too many hits mean you get caught.

Instead, avoid these obstacles by ducking left and right with the corresponding arrow keys, jump over them with the up arrow, and use the down arrow to slide underneath some of them.

As you advance forward, also try collecting as many coins as possible to increase your score and maybe buy new skins, clothes, or cool things from the shop, and if you find upgrades along the tracks, grab and use them to your advantage.

It's that fun and simple to play this game, so we hope to see you do it right now, as only on our website you can!