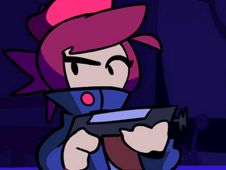 We love it when we get to bring you FNF Games that feature characters from some of the best new indie games on the internet, just like it happens today, where Friday Night Funkin Rhythm Rush is a game crossover between FNF and the Contract Rush game, hence its title.

There are two stages on which you do battle, each with its own character, as well as a custom song:

You are going to use the arrow keys to play the notes of the songs at the right time, so when arrow symbols above BF match with one another, you have to press the same arrow keys, and doing so up to the end the songs guarantee you a win.

Be careful not to miss playing too many notes one after another, because that happening means you will eventually lose, and you can't want that to happen, right? Good luck!