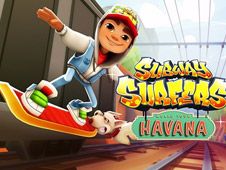 What is Subway Surfers: Havana?

Havana is the capital city of Cuba, and one of the most beautiful cities in the entire world, but a city where most people can't travel to how they want and when they want to do it, which is why we are excited to offer you the chance of going on an adventure through this city with this awesome new endless runner game called Subway Surfers: Havana!

You will have to run with the graffiti artist character of your choosing through the city of Havana, avoiding all the obstacles in your path, because hitting them means slowing down, and if you end up being caught by the ones chasing you, you lose the game and have to start again.

Avoid obstacles by using the right and left arrow keys to move, the up arrow to jump, and the down arrow key to slide underneath them. As you advance, also try collecting as many coins as possible, so that you get a big score, or maybe buy some new skins and cool upgrades for your characters.

It's that simple to have fun, so don't waste any time, start this game right now and then continue the Subway Surfers World Tour by playing the other recent games added into this category!