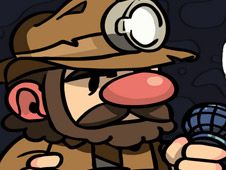 What is FNF vs Spelunky?

Spelunky is a miner from the video game with the same name, a character that you became when you played these games and used to go in the underground with, where you would do your best to reach as deep as possible while mining diamonds, gold, and other treasures.

Well, this time he becomes the antagonist of a Friday Night Funkin' Game, where you have to defeat him together with Boyfriend on the following custom tracks: Caves. More songs soon to follow!

Help BF defeat the miner in a battle of music!

To hit the notes of the songs in this game, use the arrow keys. Press them at the same time as arrow symbols above BF are matching with one another, following the chart this way to the end of the song, and if the progress bar has filled towards you, you've become the winner, simple as that!

Of course, this also means you need to focus hard enough that you don't miss too many notes in a row, because if that happens you lose the whole game and have to start again. Enjoy, and good luck we wish you all!