FNF: A Night at XLNC 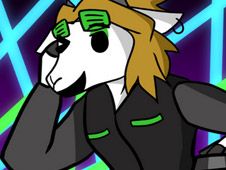 What is FNF: A Night at XLNC?

XLNC is one of the hottest clubs in the whole world of Friday Night Funkin' Games, and Boyfriend and Girlfriend finally got passes to go to them, which is why Boyfriend is now going to groove and funk on the sick ass beats made by DJ Terry, who is one of the most talented sheep in the whole of music!

You can duel against this character in either the Story Mode or Free Play mode, and you do it on the following songs:

Can you stay on the cool beats of DJ Terry?

To prove that you can, be focused, and when arrow symbols above BF are matching with one another, press the same arrow keys on your keyboard, and do that until the song ends to win, which happens if the progress bar is more towards you than the enemy.

Be careful about missing notes, because if you miss too many of them one after another, you lose the whole music fight, and you need to start all over again from scratch. Good luck, and make sure to check out more of our new mods from FNF, only here!