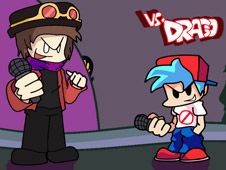 What is Friday Night Funkin’ vs Drago?

Drago is a weird-looking boy who has just challenged Boyfriend to a musical battle, so of course, our champion had to agree to it, and if you right now play the Friday Night Funkin’ vs Drago mod we've just brought for you, you will be in for lots of fun from start to finish, just like it has been the case for us!

Boyfriend Vs Drago, a new battle of rhythm!

This new character can be challenged in either the Story Mode or Free Play mode, and you do it on the following tracks:

In this game you are going to use the arrow keys to hit the notes of the songs, having to press them at the same time as arrow symbols match above BF's head, not one moment faster or later, or you lose after making too many mistakes.

Instead, keep on playing the notes to turn the progress bar in your favor by the end of the song. Good luck, enjoy, and stick around for all the more fun that is yet to come!