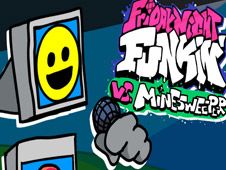 What is FNF vs Minesweeper?

The Minesweeper game, where you have to find the numbers and not step on the mines has come to life as a computer-shaped game, and he is now challenging Boyfriend to a musical battle, something we would consider a mistake, since BF has you in his corner, and together you will sing the songs so well that you win!

Defeat this program and game on the following songs:

Can you help Boyfriend defeat this classic software and game?

If you think you can do it, then be focused, and when you see that arrow symbols above BF match with one another, make sure to press the same arrow keys at the same time, and if you do this until the song ends, and you do it right, the progress bar turns in your favor and you've won.

Be careful not to miss too many notes one after another, because if that happens you lose the game and have to start it again, something you can't want to happen, right? Good luck, enjoy, and have fun as only here is possible!