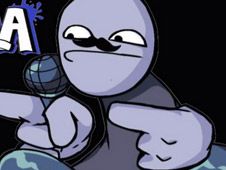 There is a never-ending stream of new and wacky characters for you to defeat in our category of FNF Games online, just as you can see right now, when our administrative team invites you all to have an amazing and unique time with the game called Funkin.FLA, without a doubt one of the best new games of the day!

This character you are facing off against looks like a stickman blob has a mustache, and be quite creepy. This is a demo mod, and so far it only has one track, a track called Rompfla.

How to play the FNF Funkin.FLA mod online:

To win the battles you need to reach the end of the songs and turn the progress bar in your favor, so use the arrow keys to do it, pressing them at the same time as arrow symbols above BF match with one another.

Do this to the end of the songs, but be careful not to press the keys at wrong times too many times in a row, because if that happens you lose and have to start all over again.

It's all that simple, so let the fun begin right now and here, and stick around for more fun to come!