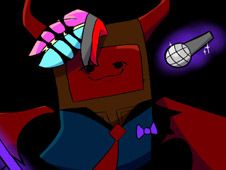 What is FNF Vs Dark Chocolate?

A Dark Chocolate has come to life to challenge Boyfriend in a music battle, and it is a dark one, it also means that it has the form of a demon, complete with horns, a tail, and a devilish presence, making this one of the most amazing and interesting FNF original characters we've seen here so far.

Bite into Dark Chocolate by defeating him right now!

For starters, choose if you want to challenge this new character in either the story mode or free play mode, and then give it your best to have a better rhythm than them and win by playing the songs so well that the progress bar favors you at the end of the songs.

That is achieved by pressing the arrow keys at the same time as the arrow symbols above BF match one another, but that also means that if you miss pressing too many of them in a row, you lose the whole game and battle. Enjoy!