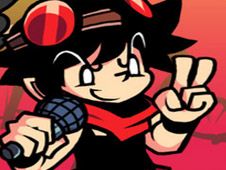 What is FNF x Hero’s Journey?

We really hope that all of you are ready for a big new FNF game online that has lots of songs, a brand new character to face off against, and was made by a dedicated team that created awesome backgrounds, cool-looking sprites, and did we mention that the songs rock?

Hero is the new character that Boyfriend is facing off against, an up-and-coming singer who practices a lot, and for an extra dose of fun, there is a secondary character to battle, one that looks like Hero, but is actually a villain pretending to be him.

These are the custom songs in this Week:

Do you have what it takes to beat Hero! Then give it a try right now!

In either the Story Mode or Free Play mode, play the notes of the songs according to their charts with such good timing that by the end of the songs the progress bar has tilted towards your favor!

To achieve that, when you see the arrow symbols matching above BF, make sure to press the very same arrow keys to match them, but be careful not to play them at the wrong times, or you lose the whole game.