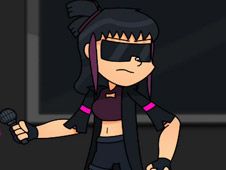 What is FNF vs Pheobe (Pop Shock)?

One of the biggest rising stars in the music world of Friday Night Funkin is Pheobe, also known as Pop Shock by her stage name, and she wants to test out her skills on the person she heard about being a master of rhythm, and that's Boyfriend of course!

By playing our new FNF VS Pheobe Mod you are going to duel this character, and we're sure that you will really enjoy the custom songs from her week:

Play the game in either the story mode or go straight to the songs and skill the dialogues and cutscenes with the free play mode, and in both of them you need to have good timing, rhythm, and focus so that you play the notes of the songs at their right times in their charts, and if you reach their end, you won.

To do so, simply wait for the arrow icons that float around BF to match with those above his head, and then press the very same arrow key on the keyboard. If you miss to do that too many times consecutively, you lose, so be careful not to allow that to happen. Have fun!