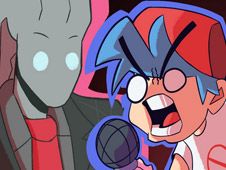 What is FNF x Week Sigma?

Sigma is a brand new FNF antagonist, one that has been inspired by a YouTube video, just like many of them have before, and he looks like an alien, one that wears the sigma symbol from Greek's ancient language on his back. He can be quite creepy, but we are sure that you are talented enough to defeat him, something that you have to do on the following songs:

Defeat the evil Sigma through the power of music!

These songs are playable in either the story mode or free play mode, it's up to you which you choose, and in both cases, you have to reach their end, turn the progress bar towards you, and win by having a better rhythm!

This means that when you see arrow symbols above BF match, you also press the very same arrow keys on the keyboard to hit the notes of the songs.

If you do this until the end and the bar has turned towards your icon, you win, but be careful not to make misses one after another, since that causes you to lose. Enjoy!